Link for photos from Susana https://photos.app.goo.gl/Acsendw4P66URNdG2

The final day started with plenty of time for ‘reflection’!!, but eventually a steady & consistent, albeit light wind, that only required a couple of minor tweaks to the course, as the remaining 16 races of round 2 were completed.

Ties were created in the final races of the day, which saw Napier Girls A beat Napier Boys B to go to the top of Gold, with New Plymouth Boys in 3rd place.

Cambridge were the convincing winner of silver fleet, with the last race of the day producing a 3-way split for 2nd (Aquinas), 3rd (Taupo Nui a Tia) and 4th (Otumoetai) – this was finally resolved through Appendix D, on lowest average points against common competitors.

Napier Girls A retained the Girls Trophy, while Tauhara repeated their win of the Local Trophy against Taupo Nui. 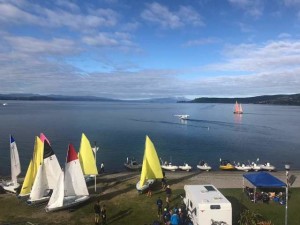 11 am  – waiting for wind – for a while it looked like only the float plane was going to see any action. Now the wind is beginning to fill in & the course is being set.
Later on – the wind continued to be light & inconsistent – patience by the race committee was rewarded with a total of 26 races of RR2 completed.
Hoping for more consistency for the final day tomorrow – picking up from where today finished
The Napier Girls A had some good results, beating the strongest teams in Pool A, but against form losing to Napier Boys B for 4 wins from 5 races.  Napier Boys A & New Plymouth Boys both had 3 wins from 4 races.
In Pool B, Cambridge, Aquinas and Taupo Nui also showed good form in their new pool.  Cambridge are leading the pool with 4 wins 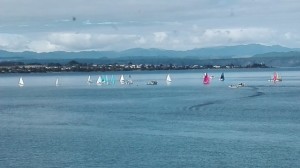 After some course adjustment, CNIs had a fantastic day of reasonably consistent wind which allowed the completion of Round Robin 1 (bar one race which was delayed due to gear failure)

Taupo Nui, Aquinas and Cambridge will swap with Napier Girls A, New Plymouth Girls and Napier Boys B for Round 2.

Forecast looking like some consistent wind again for RR2, although somewhat lighter which might help reduce the incidence of gear failure.