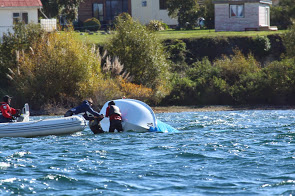 Racing is being postponed until 10am.

Silver fleet results so far for RR3 are available under ‘Results’ & the technical glitch is being resolved for the live scoring.

Check out this link from Sarn Elliott of www.aeromedia.co.nz for drone coverage on Thursday. https://mega.co.nz/#!LUhljToI!qrPRVpWSwc2aCw6-6SvXKQ8HUqqSXZCYLkhx8bqBCFc

Due to the lack of bronze fleet sailing on day three, four extra sets of boats were put in to the bronze course for the morning to speed up racing and catch up to the A course fleets. Racing began on time for day four in a light nor’noreast, which died away and some races reached their time limits. With a lot of mark laying and relaying in the light and shifty breeze, there was a long wait while the wind settled and filled in from the northwest. After gold and silver finished their second round robin, there was a sudden death repecharge for gold-silver between Napier Girls and New Plymouth Girls, with Napier Girls staying in gold. For the silver-bronze sudden death, Kristin beat Queen Charlotte to advance up to silver, with Queen Charlotte going to bronze. The afternoon’s racing continued through until 1700, to try to get the fleets up to half way through round robin three. There were a few upsets with some of the top teams getting beaten. We had some significant damage to boats in the gold fleet, with some teams lacking in communication. For the final day, in gold fleet Grammar lead Kerikeri and Marlborough boys. Silver is led by Glendowie and Taupo, with bronze led by Macleans, Queen Charlotte and Tauhara.