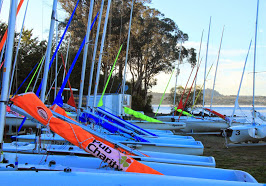 The final day of racing got off to a slow start with some light wind and rain delaying the racing until 1000. Despite the rain, the north-easterly winds kept the chill away for the sailors and race officials, which was a nice change from the rest of the week. The slow racing tested sailors’ patience and light wind sailing abilities. Many sailors struggled to make the starts which ultimately decided races. There were again some races which timed out, much to the dismay of some top teams; resulting in a re-sail. The umpires had a busy day with giving out rule 42 penalties in the light for some sailors testing the limits. On the A course, the start boat and mark layers had to continually readjust the course due to consistent wind shifts throughout the day. The bronze fleet managed to finish their third round robin just before the breeze died out completely. Unfortunately, the A course fell short by four races to complete the third round robin. Despite this, the round robin results held, due to being over 80% complete. There were some light-hearted moments even with the pressure of the final day. Christchurch Boys managed a win against Kerikeri, and a big cheer from the barge went up as they finished. Final bronze results were a convincing win from Queen Charlotte, after a trying week. Silver fleet was won by St Kents who fought hard throughout the regatta. Marlborough Boys sailed consistently well to finish closely in third place, behind the long reigning champions, Kerikeri. Unfortunately Kerikeri were knocked off the number one spot after five years by Auckland Grammar, who are the Secondary School Teams Racing National Champions for 2015. The racing between these top teams was incredibly close with some hard fought races being won and lost by a whisker. Napier Girls took were the first girls’ team, followed by New Plymouth Girls and Diocesan.

It is a testament to the teams the way in which they conducted themselves this week, as everyone was respectful of each other, the boats and the volunteers that make this event happen. The prize-giving was held at the Great Lake Centre, which once again proved to be an excellent venue for the event. The results were announced from bronze through to gold, with some excellent speeches by team captains, some in particular who would do well to MC the event in a few years’ time. Chief Umpire Jim Park gave out his well-known awards for memorable moments of the regatta, which brought about some good laughs at the mistakes and mishaps from the week. Napier Girls took out the girls’ title for 2015, followed by New Plymouth Girls and Diocesan. Throughout the prize-giving a time lapse footage was shown of the set up and goings on of the week, giving insight in to the behind-the-scenes effort. A particular highlight was the drone footage shot of the gold and silver fleets on Thursday with the racing over by Two-Mile Bay. The week in Taupo was by all accounts very successful with the most races completed at a National event in a number of years. We look forward to doing it all again next year, probably at  Algies Bay, Warkworth. Many thanks to all the volunteers and support from Lake Taupo Yacht Club for hosting such a great event.