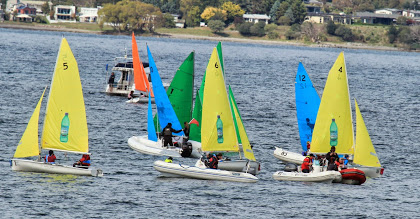 We had a slow start to the regatta with a postponement for just under an hour due to a lack of wind, which continued to plague the fleets for the first half of the day, with a number of races having to be re-sailed due to reaching the time limit. In the afternoon the breeze got up to a steady 15 knots as forecasted, which tested some teams at times. The standard this year of the bronze fleet is much higher, with some great boat handling seen by the umpires. With the light winds we were unable to finish the first round robin with about 20 races to go for the gold and silver fleets and 10 to go for the bronze fleets. So far in the gold fleet the reigning national champions Kerikeri have an early lead, followed by Westlake Boys and Auckland Grammar. Napier Girls lead the silver fleet to New Plymouth Boys and Rangitoto. In the bronze fleet Napier Boys leads, with Macleans and Mahurangi close behind. For day two we have a forecast of westerly 15 knots easing to southwest 10 knots this afternoon, with a high of 15 degrees.