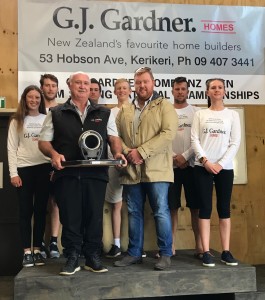 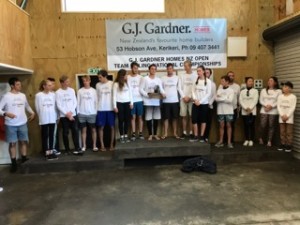 All the Podium winners

11 teams turned out on the water from all parts of the country and a wide range of ages from 13 to 30’s.

The first day saw chilly and variable winds from 10 knots to gusts of high 20 knots so shelter had to be taken and the umpires were kept busy altering the course at every wind change. The sailors had a great workout and for many who had not been on the water recently this proved invigorating! A whole round robin was completed with Kiwi Team Racing wining all of their 10 races, RNZYS winning 9, Thievery with 6 and Wellington with 5, so it was all on. 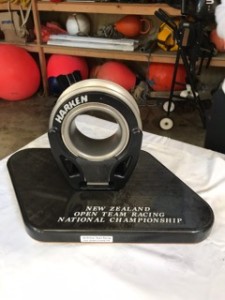 The second day saw more settled wind conditions, be they chilly, and so another round robin was completed and then the race committee got straight into the final series. Here the top 5 boats go through to the semi-finals and the bottom six have a sail off so everyone stays on the water. The competition saw some excellent team sailing skills and with only a few more races to be sailed on Day 3 due to light winds Kiwi Team Racing emerged the winners.

This competition was a special event with some unusual characteristics. The age range being open meant that present school pupils could help to make up team numbers. For many sailors the only option for competitive sailing after school is match racing and so this brought many sailors back together and onto the water again. The reunion and comradery was apparent. The competition also assists with the development of competitive representation for major team racing events around the world such as The Wilson Trophy, The Heineman Cup and the World Team Sailing Championships. 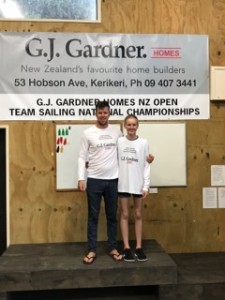 The Youngest and the Oldest Sailors

The competition was a Northland effort of skill and hospitality. G.J. Gardeners’ Kalie van Jaarsveld Snr and Jnr were again the sponsors, so many thanks. The enormous team of volunteers manned all aspects of the competition from billeting, setting out the course, starting and finishing boats, umpires, providing well needed pop corn on the change-over boat and The Kerikeri Cruising Club for the use of their facilities and hosting the event. It is inconvenient for members of the KKCC when the launching ramp is taken over, so the event is very grateful to them as well. I am sure from the comments of the sailors that this will be a popular regatta on many calendars for next year.

Third place was Wasted Seaman, second was RNZYC and the winners were Kiwi Racing Team comprising of Captains Frankie Dair, Sean Herbert and Reuben Corbett with their Crews Maeve White, Jeremy Mitchell and Serena Woodall. Kiwi Racing Team won every one of their races. 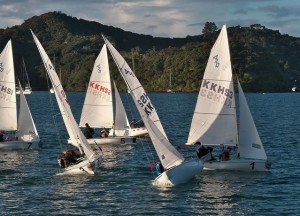