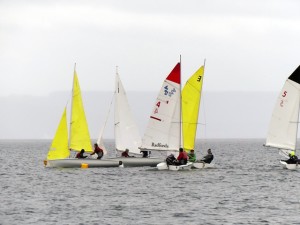 We have managed to complete our training clinic.  By all accounts, everyone found something to enjoy!  Our first day was too windy so Hamish concentrated on classroom training (I’m sure all the sailors were thrilled to be back in a class room during the school holidays!).  The second day produced slightly lighter airs, but not by much and those that braved the water had to hang on for grim death!  However, those that persevered, gained a lot in experience – some of it swimming!

The last day saw much kinder weather and we managed to complete 4 round robins.  Joanna was able to process the results from home – poor Irina did indeed end up as the Queen of the Finish Boat and had the unenviable task of recording the results on the water and texting the codes. If anyone can track down something like the old chinagraph pencils (no one seems to use them anymore!) so that we can do wet weather results on a laminated sheet – it would be good

The emphasis was very much on training, so although we produced some results, the sailors (particularly the crews) were swapping in and out of boats regardless of colour.  It was good to have four sets of boats which did allow the four teams to complete a round robin without changing boats. Joanna had set up a series of 8 round robins which allowed for two boat-to-boat swaps at the end of every odd round robin and a full swap at the end of every even round robin, which would have resulted in 48 races and each team sailing every other team twice, so that each race was done in reverse colour.  It was just as well it was a training clinic not a regatta, as the colour swap was never done which meant that there was no boat or running order equalisation!  With more experienced sailors and more consistent (and nicer) weather, it would have been interesting to give it a go – but that’s sailing for you.